this is the guy I was looking into. It think it comes from an European engine.

TurboABA said:
Yes.... the letter identifies the generation... the latest gen has the best features from bearings to component design, etc. (read also the best efficiency, spool, blah blah blah). There are tons of technical things to discuss if you really want to compare.

On that snail, it's the same gen\tech as what you have now, only slightly bigger, so you're adding lag to gain a little more later on.... you have a GTB2056 now
Click to expand...

The actual differences are quite hard to get. Blades are a little longer (B vs D), hard to speculate any performances differences between the 2. I know the D would outperform the B, but… by how much?

I am going for a DPF delete + downpipe, I need a new tune for sure. Might as well get a slightly bigger turbo. Considering the backpressure drop and still limited changes in the turbo, I would expect the turbo spool to remain “about” the same; and a modest but still appreciable power increase.

The idea is to add just a bit more (40-50hp? As per the table from darkside), and ensure the fuel system can keep up. Assuming a 280HP (crank) at the moment, this could bring to 320ish HP. Darkside claims OEM fuel system in that range too, so this sounds like a sweep spot. 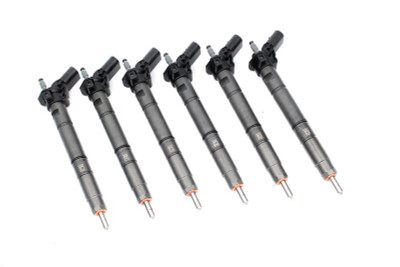 To top it off, the price of the turbo can be slightly offset by selling mine for a 4cyl TDI.


volkswagens-for-life said:
I'm always worried to buy used turbo. Nobody knows how it was maintained or beat on
Click to expand...

100% true for a used turbo. I would definitely check for shaft play + thrust and inspect compressor cleanliness for any evidence of cartridge seal. But a seller with bad intention could cover some signs for sure.
Z

· Registered
Joined Oct 20, 2020
·
455 Posts
I think you missed read me, or maybe I wasn’t clear: I cannot get data on how much better is a GTB2260 VS GTD2260. Even if I see the specs difference and speculate on improved durability, it is hard to extrapolate how much difference it will make on the engine output. We would need 2 dyno for the same car running both turbo configuration with exact same specs. I am sure there are benefits, but I cannot even speculate how much.

Then, for the reduce back pressure, you are right, I mentioned “about” the same. I expect a small difference; I don’t think low end will be significantly changed. If I get full boost at 1750RPM instead of 1700 RPM, it is “about” the same for me. If you walk breathing through a large straw, you are being a bit chocked. Less than if you would be running, but still chocked. I believe the turbine is all the backpressure that diesel engine needs to be efficient. I know that on a gas engine benefit from increased back pressure at low range. Some Honda D15 engine were running on 12 valves under a certain RPM, and VTEC engagement engages 4 more exhaust valves.

This 2260 turbo upgrade seems to be the best bang for the buck I can see. A bigger turbo would require new injectors (2k$) and a more expensive turbo. That is +-2500$ for 40HP and a bigger dip on the very low range. Being OEM turbo for the same engine in Europe, I would expect the drivability to be very good.

With the extra rumble from the exhaust parts and a bit more fun under the pedal, this should be pretty fun. Not a game changer, just a 12.5% bigger smile.
Z

· Registered
Joined Oct 20, 2020
·
455 Posts
I'll have another deeper look at the thread, thanks for the detailed (as usual) explanation. That is a pretty tangible explanation of the benefit of GTB VS GTD turbo. There might be injectors or other engine tweaks that offset some of that difference, but it gives a very good idea. I am not 100% sure we are comparing the exact same engine config with only a turbocharger change.
Z

· Registered
Joined Oct 20, 2020
·
455 Posts
I am not done studying the thread. So far my thought:
considering it is not plug & play, GTD turbo are out. The very low end torque is interesting and all, but fitment issues might overweight the benefit. There is promising GTB2260 using D components, but seems quite complicated too, and more importantly not available at the moment.

My thinking at the moment is to keep things relatively simple, so the best way seems to be GTB2260, delete all, tune and enjoy it as much as I can LOL
Z

But unfortunately, I doubt any feedback I might provide will meet your need to evaluate if it was a good decision or not. Other than “it pulls a bit harder”, I doubt I can elaborate much more than that. I can also bring out argument like “better throttle response” or other subjective comments.

I do not intend to dyno the car as is or after the upgrade. I am open to sponsor to fulfill anyone’s curiosity to cover the dyno expense.

I’ll keep the data crunching, spec analysis and custom fabrication to my day job.
I will check out the used turbo tomorrow.
Z

· Registered
Joined Oct 20, 2020
·
455 Posts
I can provide arbitrary numbers for estimate engine output in order to save our friendship fellow Canadian.

We can also drive to Mexico and do pulls; assuming we run the same tire specs under the same pressure, fuel level. But please be indulgent as I'll have 3 screaming kid in the back in their booster seats. If the difference is not significant enough I'll claim I lifted off as my youngest is facing backward

· Registered
Joined Oct 20, 2020
·
455 Posts
Ball bearing is indeed a lot better no questions. But the GTD is not a direct replacement where the GTB is. I would call it good, but not optimal. The same goes for the OEM GTB2056. It is not my first BBQ, I know price literally explode when putting in custom parts.

I'll get a summary of the $ VS power gain so far, once I get a good feeling about it.

I am replacing my GTB2056 to a GTB2260VZK that comes from an European engine, I am sure you know a lot more about them than I do.

I fully understand it is not the best turbo in the world.
No I don't want to mess with that turbo for now, unless you tell me that there are off the shelf component that will greatly make it better.
Yes there might be a slight spool penalty, I hope to erase part of the deficit by doing "exhaust" job.
Yes I understand that the spool gains from the exhaust work might not be huge.

So yes Ì am ready to trade a little bit of low end torque for some higher RPM power; but I don't see this as a big shift.
Keep in mind my turbo/engine has 203 000km too. The new unit seems to be in top notch shape.
Z

Looking for the specs, I came across this

www.a5oc.com
I am also very curious to see if that would spool as fast as mine with a better top end considering rollers bearings. I know turbine/compressor spins VERY fast (+250k RPM), and I would like to see what is the difference in friction.

and a new compressor wheel that I yet have to find

I don't have the OEM data to compare...
Z

But it always come to the same: how much low end I am willing to trade. The answer is some, but not a ton.

It seems like even bearing conversion is available, definitely a pricy option. But I typically prefer to do things right and not twice...

I clearly have to educate myself too, loving it.
Z

I am not yet decided what I'll do. part of me what to slap the snail ASAP and enjoy the extra power. Part of me wants to do it properly and upgrade turbine/compressor + refresh (and balancing of course).

If I install the turbo as is, then I have to remove it; get a temporary tune (or flash back to 2056 tune), get it rebuild, then swap the turbo once more and get yet another tune; which won't likely happens. And honestly probably not worth it either. I mean, if I am not satisfied with the 2260 upgrading the same frame won't cut it.

I do not intend to "design" a new compressor wheel, just buy something someone else (re) designed. Turbine is obviously needed to get the power to the compressor. It all start with how much energy you can get from the exhaust, and how it can be transferred to the turbine to generate boost.

I know turbo is not all about max peak HP, spool time is also very important. But I cannot estimate the effect with my still limited knowledge.

Worth the $ and trouble? hummmm
Z

Brendanm said:
I'd personally be much more interested in going to a GTD. People have modified them to bolt up to the 1.9 and 2.0s, so can't see why they couldn't put an appropriate rear housing on them to suit these things.
Click to expand...

TurboABA said:
How did you determine that your current 2056 is the bottleneck? At what PR, rpm, flow rate does it become the bottleneck?
Click to expand...

I expect the air delivery to be a "little" delay, but higher torque considering more CFM. So as soon as the boost hits, torque (hence HP) should be a little higher. Starting 1800RPM or so up to the top. basically an offset line, with a small delay on the very low range.
Z

EGT are definitely not a deal breaker at the moment, I know Malone still use a limit. forgot the number, but well known it is not a issue here. EGT will be almost completely out of the equation with the deletes.

Intercoolers, not an issue either considering the use and climate. If this would be a A4 track car, different story. There are no off the shelf alternative anyway; unless a FMIC which I am not interested in. Again, not a GTD2872...

I believe the turbine will make some difference, so if I can extract more from the exhaust I can get more CFM on a broad RPM range, not just over 4k. I understand that you need power in the engine to get power in the exhaust; but I also expect a gain as soon as the turbo spools.

Dyno chart should shift a bit to the right (lag), and shift up (more power). I believe the better turbo upgrade would have been a GTD2263 and meet my 350HP ish goal But If I compare the upgraded wheels I posted above, this should be close. Since the GTD is not a plug and play, I like the idea of the GTB2260 core.