TRespect said:
Yes that's one of the culprits.
Click to expand...

Micheld7 said:
My 05 around 80K miles started acting up. All Signs pointed to fuel pumps.
Instead of changing the pumps, I changed just the filter cartridge (picture below) and it runs beautiful. Since then, we've done 11K miles and still runs great!
I think many people just throw pumps at it. In some cases, it could be just the filter thats clogged up.

I think I saw somewhere where I can order a new filter cartridge (and some part numbers), as I don't want to swap the entire flange. Can anyone recommend a supplier or help me get one to Australia? Worth the current situation, deliveries from China can take several months
BTW, I promise to take good pictures of my job when I do it.
Here are just a few...

The biggest issue was to get the o-ring back correctly, as there is no groove in the housing. Apart from that it was straightforward and I left the bottom of it connected to the hoses, just unscrewed the dome part with the filter.
T

· Registered
Joined Aug 25, 2017
·
3,346 Posts
The filter is available on ebay. You have to be careful with that o-ring. If not sealed correctly the filter does not maintain the pressure and you will be back there soon. 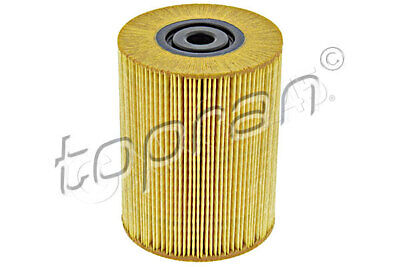 · Registered
Joined May 6, 2011
·
164 Posts
Yes that's my problem, they don't ship to Australia. Anyway, I will just clean the cartridge and pressure test the O-ring properly
T

· Registered
Joined Aug 25, 2017
·
3,346 Posts
Why not test a Mann filter the russian way while waiting for my mod ?
You need a T connector and Ground wire. And no more o-ring issues.

· Registered
Joined May 6, 2011
·
164 Posts
Nice, you are lucky to have received it from China. I bought this one recently: SCHMICK CAR FUEL INJECTION PRESSURE TESTER GAUGE KIT TEST AUTO INJECTOR PETROL | eBay
T

· Registered
Joined May 6, 2011
·
164 Posts
My understanding of the regulator is now that it has nothing to do with holding the pressure towards the rail, but that this happens via the check valves of the pumps. Unless the regulator is completely broken, and my fuel pressure is lost via the return hose from it to the T-junction. I need to pressure test the hoses bit by bit.
T

· Registered
Joined Aug 25, 2017
·
3,346 Posts
My understanding so far: The pumps output 4 bars and hold that with internal check valves. The regulator will only allow 4 bar pressure if the pumps go nuts and start putting out more than 4 bar pressure which will damage the rail or cause fueling issues. The regulator does not hold the pressure. I think the regulator going bad might mean reducing the 4 bar pressure and choking the pumps. I received the used pumps yesterday. I will be testing all these theories tomorrow.

· Registered
Joined May 6, 2011
·
164 Posts
Excellent. I was planning to do some testing myself this weekend, but unfortunately the car is being needed and the weather has taken a nasty turn. Excuses, I know...

I look forward to your findings regarding the pressures.
T

· Registered
Joined Aug 25, 2017
·
3,346 Posts
Luedmann reported having replaced the pump and found a repaired broken hose inside the tank. He will certainly chime in with his pics.
Now did you get the pumps out?
I saw the filter pics you posted. Does that mean you opened the tank and checked the hoses and the pumps for leaks, cracks?

· Registered
Joined May 6, 2011
·
164 Posts
No, sorry, those filter pics are a year old or so. My car will be needed this weekend to tow a trailer, so I can only do the pumps next weekend. I will definitely open the filter again though, because back then it was pitch black with what looked like carbon, so I am wondering if somehow carbon powder leaks into the tank from somewhere (the ominous active carbon filter unit?).

Shame that VW didn't give the regulator flange a check valve as well. But on my car the rail pressure takes long to build up (slow start and sometimes rough running and stalling straight after start) and collapses as soon as I switch off the ignition. Otherwise the truck runs fine, no codes etc.

I also had plenty of vacuum leaks over the years, which I kept patching up. The most recent one was the little hard hose that runs from the right side of the intake manifold across the engine to the intake register valve thingymabob next to the injector rail.
T

· Registered
Joined Aug 25, 2017
·
3,346 Posts
You probably have an evap leak somewhere. There are two evap hoses one on each glange going to the evap canister. You need to check that. As for the vacuum I removed all that hose and replaced it and relocated the vacuum tank and vacuum valves to the side of the engine. Makes working on the treg easier now. Check my thread here

Anybody done this before? I will use elsawin to do the replacement but if you have any tips or diy info feel free to add them here.


Sent from my iPhone using Tapatalk

· Registered
Joined Jun 3, 2020
·
40 Posts
This line drawn in red was cut inside the tank and seems like someone tried to ghetto fix it and it just burst inside again, the diagram with names is just a pic I found online of the same fuel pump assembly ( they change depending on model year and engine)
T

· Registered
Joined Aug 25, 2017
·
3,346 Posts
Decided to make a passenger side stainless steel flange which will receive the new 4bar fuel filter with integrated regulator. Here are the hose connector diameters for reference. The new system will bypass the fuel filter and be very easy to replace. Update coming... 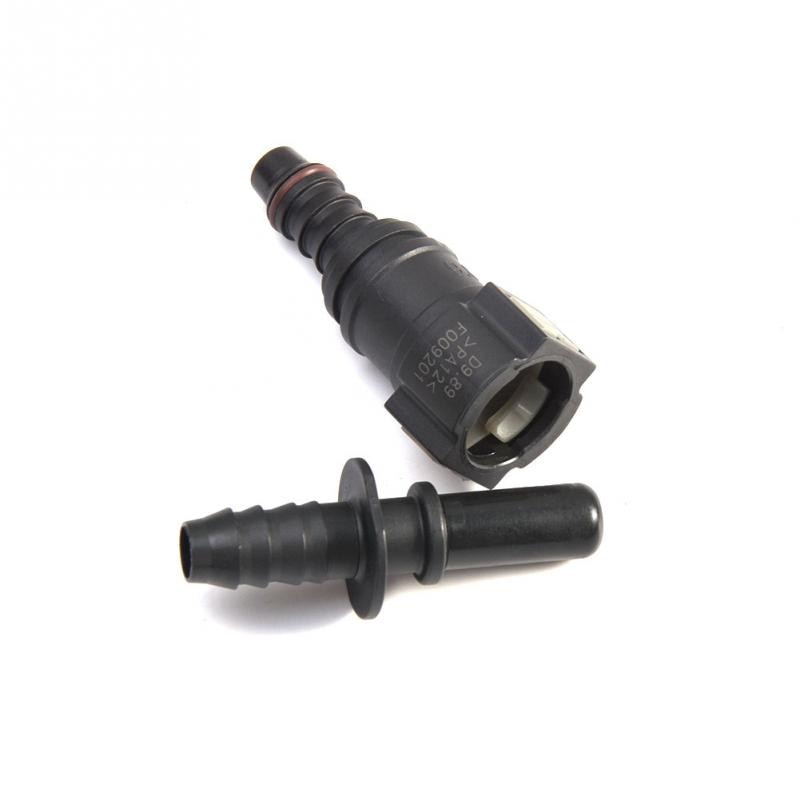 · Registered
Joined May 6, 2011
·
164 Posts
Extracted the regulator and filter flanges today, to get to the bottom of my pressure drop after shut down, resulting in hard crank of 8-10 seconds or longer.

I first opened the tank covers and tested each pump separately by using a pressure gauge and shorting the relay.

Pressure was initially zero and took long to build, the left pump gave about 2.5 bar, the right one 3.8 bar. Both should be around 4 bar, as per repair manual.


However, I heard a gurgling from the tank, sounded like a running tap. 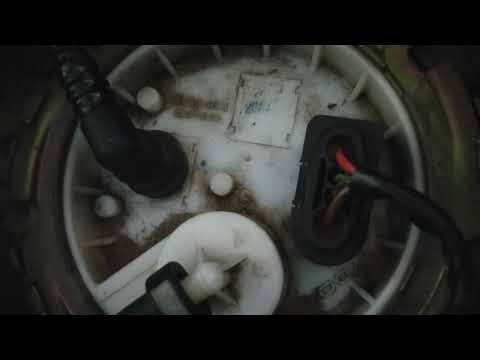 As heard near the right flange

This is how the pressure from the transfer pump (left side) behaved when just shorted via the relay: 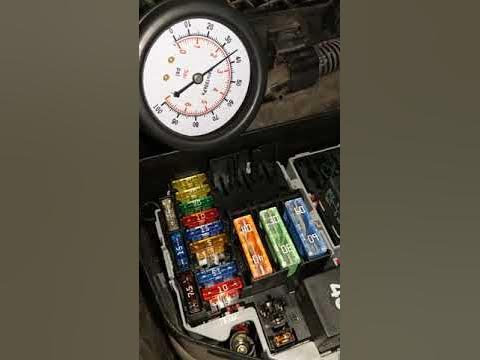 And in comparison the right hand side supply pump: 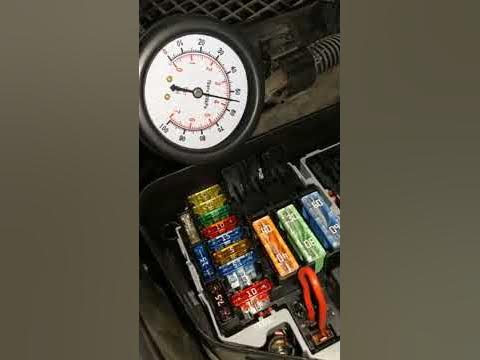 This is the high pressure pump

Note that both pumps feed into the filter, from where it goes on to the right flange and via the pressure regulator to the engine. Since there are no valves or anything between the pumps and the fuel rail, the distinction between transfer and supply pump is academic, both should contribute to the fuel pressure delivered to the rail. I do not know why the one has so much less pressure than the other, but will test the throughput later as well, just so I can be sure both pumps are still sound and within their operating parameters. By the way I was surprised to see the great condition the plastic parts and hoses are still in after they were for 15 years immersed in petrol.

Turned out the o-ring of the filter housing was leaking fuel from the filter back into the tank, because it must have been incorrectly installed and finally gave up. 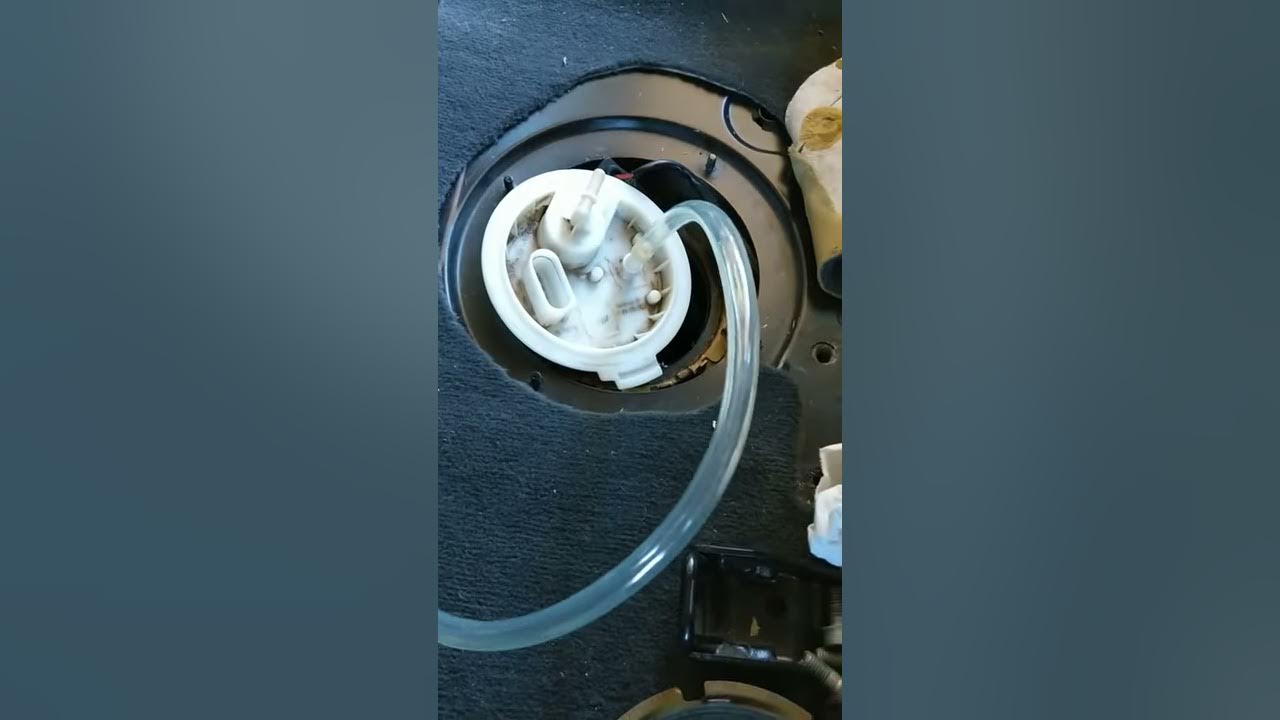 Blowing air into the supply line shows the leak 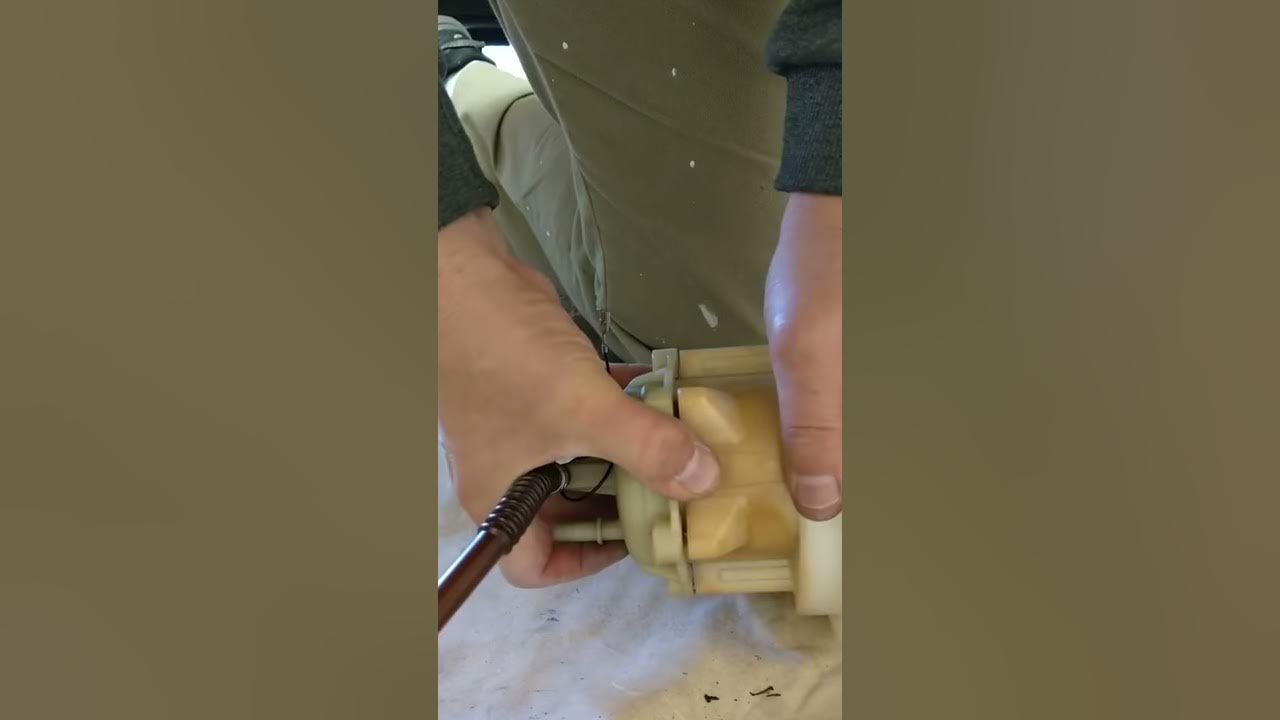 To find the broken seal ring

Not having a new o-ring handy, I tried to use plumbing tape but couldn't get it 100% tight. It was pretty tight though, dropping the pressure now over several minutes rather than seconds as before.

Got a new seal for a few dollars the next day, the o-ring is tricky to install because the VW engineers didn't provide a groove, so it tends to slip down into the bottom half of the housing and will easily rip or kink. I got it installed on the sixth attempt with the help of some lubricant. Pressure test successful so far.

· Registered
Joined Aug 25, 2017
·
3,346 Posts
Nice job there. You have a better understanding of how the system works now
Custom flange with filter and integrated regulator on the passenger side is in the AutoCAD stage.
Flange is being designed so the filter (man wk69/2 or equivalent) is removable without opening the tank.
N

· Registered
2006 V8 Touareg AIR, nav, hid
Joined Sep 18, 2006
·
4,456 Posts
The only question I had pondered was about the flange used for the Phaeton. The Phaeton used a external fuel filter so it is possible that a Phaeton flange would be plumbed correctly.

Now if you want to talk about sourcing an unicorn part, that would be it. Wonder how many of those flanges are in North America, including in recycle yards. Less than 50 is my guess.

I tested the fuel line at the exit from the tank (RHS) after putting everything back together, and it holds the pressure really well (<0.3 bar drop in > 10min). I also measured the output of both pumps at the tank flange and it is fine (800ml in < 10s). So the filter can't be clogged, and there are no other obstructions.

But, the car stalled after about 30s of running, then started and ran fine.

The only thing I noticed is that the left side pump only has about 3 bar pressure, while the right has the required 4 bar.

I am worried it has something to do with the fuel levels and the decision by the ECU which pump to run and when.

What could this be now?

Could it be the problem happens as soon as the higher pressure (RHS) pump stops, and as it switches to the LHS pump which has lower pressure, that sudden drop from 4 to 3 bar causes the random stalling?
101 - 120 of 160 Posts
About this Discussion
159 Replies
10 Participants
Last post:
TRespect 2 mo ago
Club Touareg Forum
Club Touareg Forum is a forum community dedicated to Volkswagen Touareg owners and enthusiasts. Come join the discussion about VW Touareg Sport Utility Vehicles and more!
Full Forum Listing
Explore Our Forums
General Maintenance & Repair Australia & New Zealand Brakes, Steering, Suspension, Wheels and Tires Mobile Electronics and In Car Entertainment Drivers Lounge