Joined 14 d ago
·
5 Posts
Hello everyone, I recently joined and have had my 2013 Touareg TDI for about three months now. My goals for this car is to have something that can get good gas mileage, is fun to drive, and fulfills all my utilitarian needs.


The vehicle had 171k miles with 2 previous owners and a clean title with a dealer service history. The guy I bought it from was an older gentleman who lived in the country, had too many cars, and had no need for it so I ended up getting this beauty for a steal of $7500. It did have an oil leak the asking price was 8k, luckily it just ended up being the oil drain bolt crush washer which was a cheap fix plus an oil change.

Flash forward to two weeks later I received my flashzilla tuner, def fluid and crap delete pipes, and the Malone tuning stage 2 tune.
Initial impressions, the car felt much more powerful, the throttle response was crisp, and the torque was fantastic. This is my first diesel vehicle and coming from a 2004 v6 Touareg the difference is night and day. Highway passing is easy and the car has a nice chunky feel to it. While I was doing that I took the liberty to take off the throttle bodies and piping going to the intake manifold to scrape off all the carbon build-up that had accumulated over its 171k life. Sadly I didn't take any pictures of this but look up carbon build-up for these cars and it's nasty... I also switched to the cayenne transmission coding via VCDS and I have to say, the difference is subtle but noticeable. There isn't as much (Lag) so to speak off the line and the car actually up shift's more which is nice just cruising around town. An overall sharper feel.

So my satisfaction with the car lasted a couple of weeks and I found that I wasn't too happy with the top-end performance of the car. After 70 mph the car seems to drop off quite a bit so I started looking for some turbo options. Stumbling across a forum post (I can't seem to find which) who would of guessed Europe got the cooler turbo for these cars? Would have never guessed. Anyways I ordered one up with the install kit and put it on.


Side area cleared up and charge pipe out

Before I put the new turbo in, decided to take a sandpaper cartridge and smooth out the runners best I could. Also, I made this little EGR block off plate. In theory, this is like a restrictor plate that will keep the turbine pressure higher than it would with the normal open hole to the EGR valve. I cut the area down by over half, not sure if it made much of a difference but made sense in my head and is something cool to try out. No check engine lights for lack of flow to the EGR valve.

Swapping the turbos over isn't that bad, it takes time and some elbow grease to break loose the 6 bolts that connect to the turbine housing. Other than that it's just a matter of getting the hoses and other connectors off the turbo. Again I wish I took more pictures but what gave me the hardest time wasn't the bolts to the turbine housing as they were pretty easy to get to. It was the stripped bolt on the EGR pipe which I had to cut off. Not fun.

The GTB2260VZK is such a nice upgrade from the US spec turbo. It pulls much smoother in the midrange and up top versus before and isn't too expensive, plus it spools up louder and sounds nice . I need to take a trip to Mexico and get some videos and data logging in but I can tell you be careful, go for it on the highway next thing you know you're going 100+.

More recently this past week I noticed my brakes felt pretty squishy, I suspect they hadn't been bled properly in the past and I had driven the car 7000 miles since I've owned it so of course time for an upgrade.

Picked up the 17z calipers for $75 from a local salvage yard. My Touareg came with 4-piston calipers up front, not big enough IMO so we are going to change that.

Went with some Rustoleum high heat bronze, matches well with the blue

Pins cleaned, right one at this time was polished and the left wasnt

Hardware nice and cleaned up

Of course, had to represent

Hardware installed, peep my friends mustang bumper in the back w/ the new splitter

Caliper installed with the wheel off, it's a direct bolt-on. If you look closely the logo looks weird. Why? apparently, the vinyl I bought wasn't premium (thought it was) so it shrank in the oven. I'm debating currently if I should order some more and put it over them or redo it one day not sure.

How they look with the wheel on

After this I bled the whole brake system, there is a specific sequence to follow so if you plan on doing so yourself look up how to do it, will save you a lot of head scratching. I thought I could get away with half-a**ing it and had to do it again. Do it right the first time!

That is all I have, for now. Future plans include painting the rear calipers to match, maybe upgrading not sure. A steering wheel with paddle shifters (would be super fun). A tow hitch, I love the outdoors and plan to take this camping and whatnot, being able to hook up a trailer for that or to pull some future projects would be a good convenience. I need to see with the exhaust what is out there. I will definitely do a downpipe but they are pretty pricy for what they are for these cars so that'll probably be one of the last things I do.

I will be designing and 3D printing a turbo muffler delete for this, which will start within the next couple of weeks when I have access to some CAD software, but for now that's it! Thanks for reading.
T

2011 VR6 FSI LUX
Joined Mar 18, 2018
·
1,716 Posts
Awesome post and upgrade. I like the bronze color calipers against the blue Treg.
If you want a faster bite from your brakes I would recommend S/S steel braided brake lines. Had them done on mine when I had the pads/sensor/discs/fluid changed and it really makes a difference.

New2Tregs said:
Awesome post and upgrade. I like the bronze color calipers against the blue Treg.
If you want a faster bite from your brakes I would recommend S/S steel braided brake lines. Had them done on mine when I had the pads/sensor/discs/fluid changed and it really makes a difference.
Click to expand...

Thanks I'll look into that, do you happen to have a link to the ones you went with?

Joined Jun 7, 2018
·
70 Posts
Whats the details on the "porsche cayenne transmission coding" you have listed? 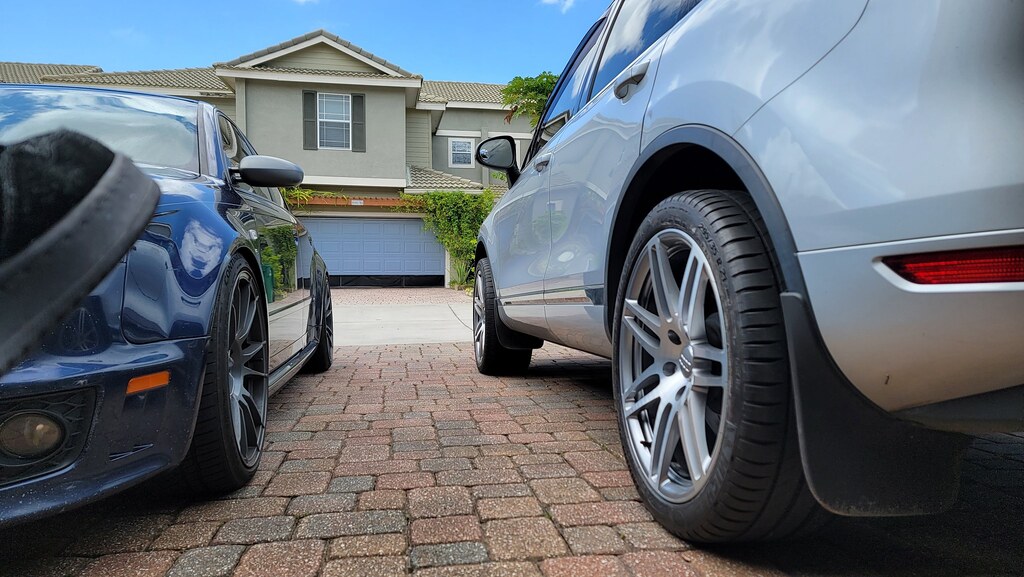 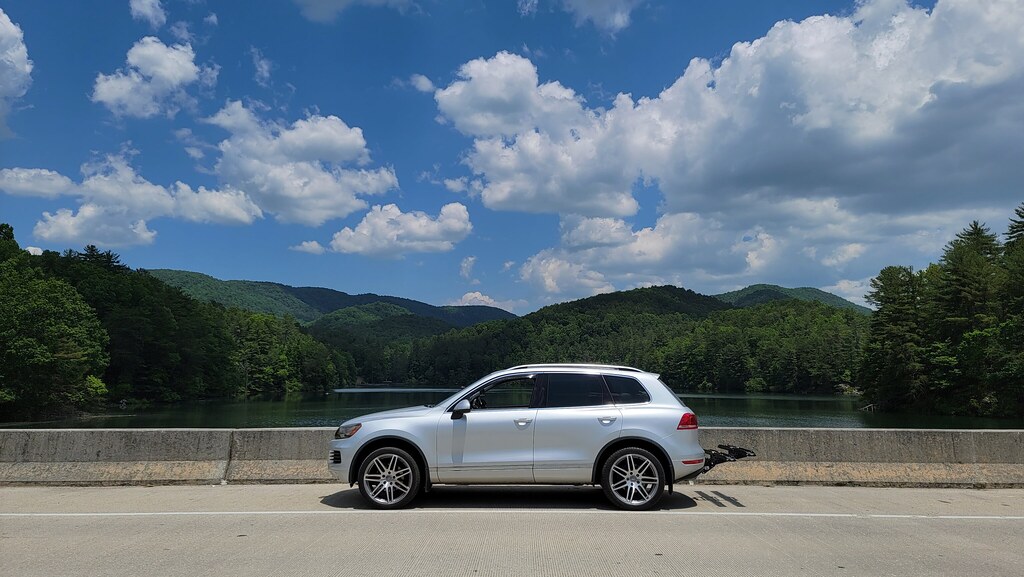 87vr6 said:
Whats the details on the "porsche cayenne transmission coding" you have listed?
Click to expand...

The Touareg and the Cayenne share the same trans. The difference being the Porsche coding is more “sporty” from a stop the trans engages a bit faster, shifts are quicker, etc. It’s a stock code that you can upload to your car via VCDS. Also those rims look fanstastic on your car, may have got me convinced 😂.

ilt_egg said:
Thanks I'll look into that, do you happen to have a link to the ones you went with?
Click to expand...

The ones in the link below are the ones I went with. It says they fit '08-'12 Touareg. Not sure if they changed things on the '13 but if so there are other brands of S/S braided lines for '13's available.

87vr6 said:
Whats the details on the "porsche cayenne transmission coding" you have listed?
Click to expand...

Simple coding change. I've experimented - found this to be the best
from stock 001368 to cayenne coding 001168. Most aggressive upshifts, most aggressive downshifts, always in the proper gear for acceleration, and improves engine braking that was removed from the stock Touareg shift strategy post-fix. Plus, if you don't already have the gear indicated turned on, this will automatically turn it on also.

volkswagens-for-life said:
Simple coding change. I've experimented - found this to be the best
from stock 001368 to cayenne coding 001168.
Click to expand...

Thanks, that's what I was looking for

87vr6 said:
Thanks, that's what I was looking for
Click to expand...

Keep in mind the car will automatically do a tranny relearn once you change the coding, so for the first 1-2 weeks it will NOT be the final product.

Flerky said:
These 17Z (6-piston) calipers were also from Treg? I was thinking about replacing calipers to 18Z, but I was not able to find any used.
Click to expand...

I got the 17z calipers off of a 2005 v6 Touareg. This is a good thread that shows which cars have which brakes.

Not that this hasn't been covered in some detail elsewhere, but there are a few things that I ran into that weren't covered (or perhaps I overlooked them). Since I went the 330mm route, that is the only fitment I can comment on and what this DIY is based on. The Basics The Porsche Cayenne...
www.audizine.com
1 - 17 of 17 Posts
Join the discussion
Continue with Facebook
Continue with Google
or sign up with email
About this Discussion
16 Replies
7 Participants
Last post:
ilt_egg 9 d ago
Club Touareg Forum
Club Touareg Forum is a forum community dedicated to Volkswagen Touareg owners and enthusiasts. Come join the discussion about VW Touareg Sport Utility Vehicles and more!
Full Forum Listing
Explore Our Forums
General Maintenance & Repair Brakes, Steering, Suspension, Wheels and Tires Australia & New Zealand Mobile Electronics and In Car Entertainment Drivers Lounge
Recommended Communities